The winner of the National Chef of the Year competition has been crowned with Ben Murphy, chef patron, Launceston Place Restaurant taking the most sought-after and prestigious UK culinary title. He served up an impressive menu of Butter Poached Pollock, Radish and Oscietra followed by Lake District Young Fallow, Watercress, Onion, Batek Pepper with a dessert of Clementine, Honey, Tahitensis Vanilla and Yoghurt.

with April Lily Partridge, chef from The Ledbury claiming her place in this year’s top three. 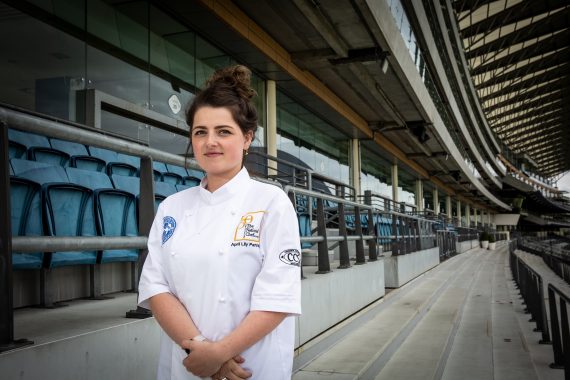 The National Chef of the Year competition commemorates 50 years this year and a celebratory event was held at The Berkeley with a Who’s Who hospitality guest list. A special golden anniversary menu was created by former NCOTY winners including Russell Bateman, Alyn Williams, Hrishikesh Desai and Steve Groves. Previous winners were also in attendance with a VIP guest list including Gordon Ramsay who won in 1992; the competition’s second ever winner Brian Price; 2004 title holder Steve Love, Frederick Forster who took the trophy in 2011 and 2019 champion, Kuba Winkowski.

Knorr Professional will also be offering the winner £2,500 to help with their own career development. This could provide a chef with exciting opportunities such as global stagiaires and in the past has seen winners get to cook at some of the world’s best restaurants. The 2020 NCOTY winner, Nick Smith staged at Eleven Madison Park earlier this year thanks to the support from Knorr.

Continental Chef Supplies (CCS) has revealed it will be treating this year’s winner to an exclusive London and South West England chef experience including Michelin starred restaurants, special chef masterclasses and artisan food tours. An exclusively designed winners plate framed together with the winner’s medal was presented to Ben by Churchill along with an additional prize of £500 worth of products.

Chair of Judges, Kenny Atkinson who is chef patron at House of Tides and Solstice in Newcastle said: “Wow, what a final, with an incredible winner! I’ve absolutely loved my first year as Chair of judges and seeing the calibre of cooking we’ve witnessed today has been the highpoint. The brief I set, purposely left the menus open to individual interpretation so that we could clearly see each chef’s personality, skill and talent so we’ve tasted some amazing food today. Congratulations to all the finalists and well done to Ben. To the other nine chefs, I want to see you learn from this experience and come back next year, more determined than ever.”

Commenting on the 50th anniversary, organiser of the competition, David Mulcahy who is food innovation & sustainability director at Sodexo UK and Ireland added: “We couldn’t have asked for a better celebration of fifty years of the competition, and it’s been an honour to welcome so many past winners to play a part tonight. The reason this competition has spanned half a century is down to the way we have developed it year on year to address the industry’s biggest issues and attracted the highest level of talent to enter and judge this competition. I know that Ben is joining a long list of incredible chefs who have become real ambassadors for our industry.”