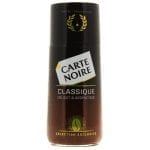 Before its withdrawal from market in 2016, Carte Noire instant coffee was worth £35m[1] and a top five brand[2] in value within Instant coffee. Its 100g SKU was also a top 5 SKU in the Convenience channel during this time[3], and Lavazza has the ambition to replicate this performance in 2018 and grow the value of the brand to £42m, including £8m of incremental category growth, over the next two years.

Francesco Varvaro, Head of Marketing at Lavazza UK, said: “Since the relaunch of Carte Noire instant varieties in Convenience, we have been receiving great feedback from customers, some of them are new to the brand and some who are previous loyal customers.

We are delighted to introduce the Carte Noire Classique 100g PMP Jar exclusively in the Convenience channel, as it offers good value and transparency for consumers, and is proven to help retailers sell products faster and more efficiently”.