Skip to content
Home
•
My review of Boiling Point, the Film.

I was first alerted to Boiling Point, the film by my friend David McKown back in August 2021. At that time, we were just about to launch Choose Hospitality, an initiative backed by many hospitality names, to encourage young people to look at Hospitality as a rewarding and viable career choice. As I watched the trailer, my heart sank. This was the last thing our beleaguered industry needed; 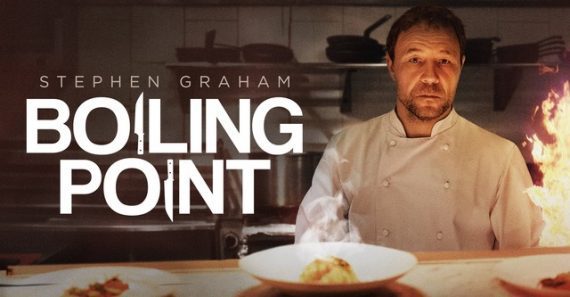 “If anyone can put a positive spin on this, Claire, you can” were Davids words.

So, I did what I always do when faced with something I am uncertain of. I went for a run and, during the time spent outdoors in the fresh air, I came to this conclusion.

The film is being released. It could be controversial. It could be damaging. When faced with a potential problem, embrace it head-on, work with it. We all know the industry has been far from perfect. But we also all know that most of us are making dramatic changes to how we manage our businesses.

After we published an interview with Tom Brown, who acted as consultant to the film, I was pleased when, at an event, a colleague mentioned to me that she had read the interview and was thrilled as her friend, Philip Barantini, was the director. Putting me in touch with Phil, and Holly Gregory from Vertigo Releasing, we managed to have an Instagram live session with the director about how and why he created this film. I was then invited to watch the whole film, before release, on a private link.

Barantini spent many years, himself, working in kitchens. He is still very fond of the industry and admits that, in the future, he quite fancies running his own gastro-pub. As with many of us industry folk, he has numerous stories to tell – good and bad of his time in hospitality. He talks our talk; he knows it because he has lived it. He is also conscious and proud that things are changing for the better. This film is not a hatchet job on a troubled sector, and I will tell you why.

The film is shot in a one, continuous take. Just like any service in a restaurant – we cannot stop, pause and rewind. 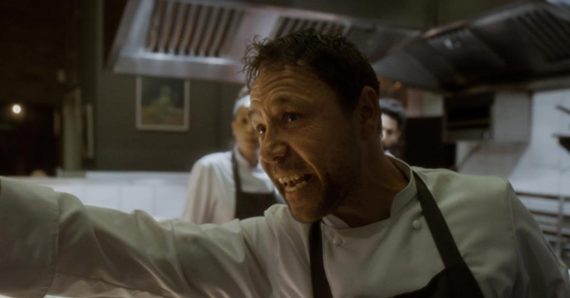 The film is set around a pretty disastrous day. A stroppy EHO inspector, a head chef (Stephen Graham) struggling with his personal life, his collapsed marriage, his alcoholism and the general disarray of his kitchen, an allergy oversight. There is swearing, yes, there is shouting, yes – but look closely at the film and you will see far more than just that.

For me, one of the most poignant scenes in the film happens early on. Casual racism towards a waitress, undermining her confidence. She doesn’t speak up; she clearly feels that she can’t. This is a message to all. Customers and managers. Firstly, don’t be a dickhead racist. Secondly, run your business so that staff can approach you when situations like this occur, be aware of what is happening in your restaurant.

Stephen Grahams character. For every time he raises his voice to a staff member, he returns and apologises. He makes amends, he talks through the situation and he shows remorse. You can tell his staff, with the exception of one of his sous chefs, love the guy. He exasperates them, but they love him.

Having run front of house in my own restaurant, Hibiscus, for 15 years, the chaos on the floor did highlight some situations that do not, and should not happen. The 3 ‘influencers’ going off menu and demanding steak and chips – I would like to think any restaurant manager would just refuse and show them the door. Similarly, the ‘most expensive white wine’ being ordered was described as a “Sauvignon Blanc for £200” – again a restaurant of that standing would have either a sommelier, or a better description – there is a disconnection there somewhere. I wonder if there was a consultant for the front of house scenes.

The former, now celebrity, chef and head chef relationship – I would love to know where the inspiration for those 2 characters and their back story came from – I guess it’s up to viewers to work on their own assumptions. I have mine, but am keeping schtum. It’s a coercive relationship, a lot of undermining, of accusation of copying dishes. It’s uncomfortable. But we don’t know why.

I don’t want to ruin the film by giving too much away. It is released on the 7th January and I am sure very many of you will be popping along with your popcorn to watch it, but here is what I took away from it;

It is a very cleverly produced film. You really feel like you are in the midst of this service. At times, I felt my blood pressure raising, I was feeling the tension of the evening myself. I wanted to delve into the film and put the service right.

Stephen Graham is masterful at the character of Andy. Believable, and for some, relatable.

The relationships within the kitchen brigade are as dysfunctional, and fun as we all know they can be. The ‘mum’ of the kitchen the head pastry chef, her troubled junior is a story that just left me wanting to know more. 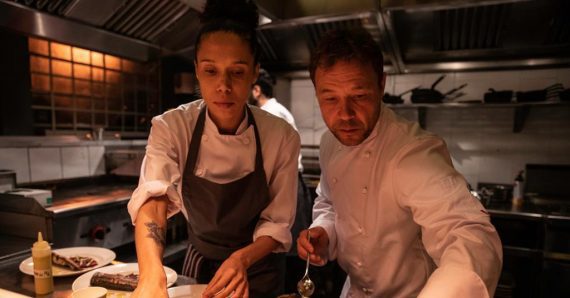 Barantini has captured a moment in time. Before the industry realised properly, that it needed to change. You can see Graham’s character struggling with his own behaviour towards his staff, you feel the frustrations and despair of a restaurant manager not qualified, nor strong enough to control her floor, disliked, and disrespected by her team.

You see the camaraderie, the friendships, the mentoring and the support. You have to look, closely, but they are there. You also witness that hard work, the dedication and the skill.

Initially I was worried for how our industry would be viewed by the public when this film was released. Having watched it, I still am, a little. The audience will fall into two categories; those who know the industry and can see the nuances of the service with industry eyes. Then there are the others, those who have never worked in the sector, who may not pick up on subtleties and may simply view it as typical of high achieving restaurants.

What we have to do, as an industry, is have the conversations and lead by example. Not be afraid and hide our heads in the sand. Stand up, admit things were wrong and change.

The film left me wanting more. The small in-between stories of the KP and his weed delivery. The night out the staff planned for later. The story of the junior pastry chef and his own problems, the collapse of Andy and the bitter, bullying relationship with his former boss. The utterly brilliant sous chef, played by Vinette Robinson – we all want a Carly covering our backs. The angry Ray Panthaki’s character Freeman, what’s his story?

This film, in my opinion, merits a drama series over on the BBC. There is so much more to this story, than just one service.